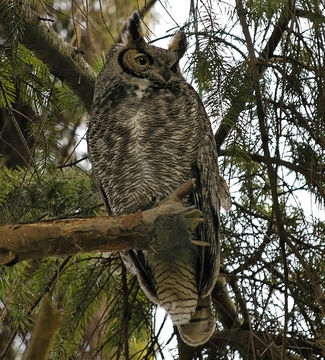 A large (18-25 inches) owl, the Great Horned Owl is most easily identified by its brown body, flat disk-shaped face with large yellow eyes, and large brown “ear” tufts. This species may be distinguished from the similarly-sized Barred Owl (Strix varia) by that species’ lack of ear tufts and brown eyes. Male and female Great Horned Owls are similar to one another at all seasons. The Great Horned Owl is the most widely distributed owl species in the Americas. This species occurs from Alaska and northern Canada south to Central America, and South American populations occur from Venezuela south to southern Argentina and Chile. Great Horned Owls eat small animals, including rodents, rabbits and hares, and small to medium-sized birds. Great Horned Owls use their excellent hearing to locate prey on the ground in order to fly down and capture it with its talons. Also, like most owls, this species hunts primarily at night, making it difficult to observe. Supplier: DC Birds.