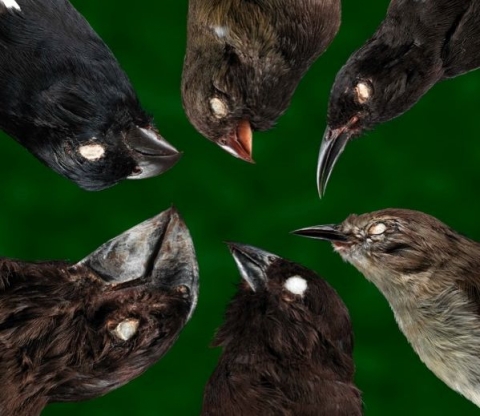 Natural selection is one of the basic mechanisms of evolutionary change (the others are genetic drift, mutation, and migration), and was the central idea first described by Charles Darwin in his seminal work, On the Origin of Species. His theory of evolution by natural selection is based on the tenets that (1) populations exhibit variation in traits, (2) certain variations are more advantageous to an individual, (3) the advantageous variations are heritable, and (4) not all individuals can reproduce to their full potential (because the environment cannot support unlimited population growth). If you have these four criteria, evolution of natural selection will be the outcome.

While the above scenario is simplified, it was chosen because selection of this type has been directly observed in birds! Research on Darwin’s finches in the Galápagos, specifically the ground finches of the genus Geospiza, shows that bill size has closely tracked climate conditions in the islands. After droughts, finch populations had deeper, stronger bills that allowed them to eat tougher seeds. This groundbreaking research, conducted over decades by a team led by Peter and Rosemary Grant, has been instrumental in demonstrating how selection in natural populations can be directly observed.