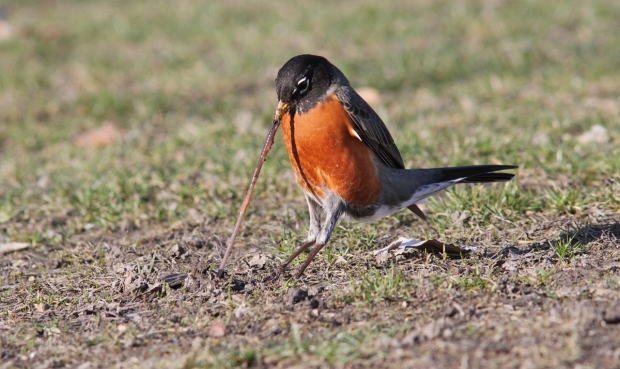 Let’s start this discussion at a natural starting point for not just an annual cycle, but a life cycle: a bird is born. Hatched, rather, from an egg. Let’s use American Robin, one of the most familiar birds in North America, as an example. A newly-hatched robin is helpless. Blind and un-feathered, it is dependant on its parents for both nutrition and thermo-regulation. After a few weeks of having worms delivered and having grown by several times its hatching size, it will have a full set of feathers, those wonders of nature that, among living animals, are unique to birds.

But those feathers, at least the contour feathers, those of the head and body, won’t last long. An integral and underappreciated part of birds’ annual cycles is molt, the annual replacement of feathers. After the young fledges, leaves the nest, it won’t have the familiar red breast of adult robins, but will be mostly off-white below with many black spots. However, like most young birds, that plumage, or feather pattern, won’t last long. Before it migrates south it will have replaced its contour feathers (but, unlike its parents, probably not its wing feathers), and will look very much like its parents with a deep red-orange breast.

Most robins are migratory, that is they breed far from where they spend the non-breeding season. While in summer robins eat primarily worms and other arthropods, in winter they eat many berries, allowing them to spend the winter in climates where worms are not active in winter. Even in the cold climate of Chicago, a few robins spend the winter, but these robins are ones that bred farther north, as the ones that nest in Chicago end up farther south for the winter.

Robins winter in communal roosts, where robins gather, sometimes in vast numbers, to spend the night. They fan out during the day to their favorite berry patches, and if these food sources last robins can spend the entire winter at high latitudes with very cold temperatures.

As the days lengthen, hormone composition changes, and along with hundreds of millions of other birds around the world, the robin born last summer will begin its northward migration. Chances are it will end up very close to where it was hatched. As soon as it arrives, if it’s a male, it will begin singing and setting up a territory. Females arrive later than males and will choose a male very soon after arrival. Together they will build a nest lay probably 3-5 eggs. Robins will even nest multiple times over the course of a summer if the conditions are right; a single pair can produce more than twenty young in a single year! And the cycle continues.

American Robins build nests of mud and grass that are often placed in the fork of a branch. Photo by Josh Engel.
American Robin (Turdus migratorius)

Food availability, such as ripe berries, can have profound affects on a bird's annual cycle. Photo by Josh Engel.
Blackberry (Rhubus) 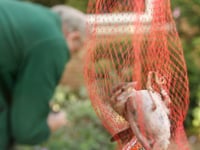