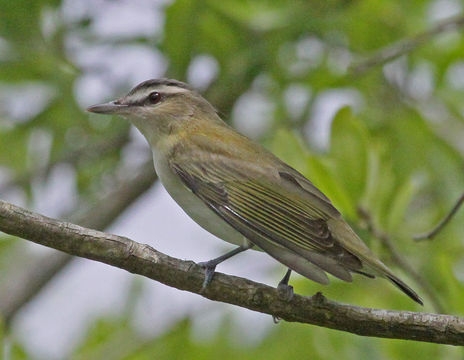 A large (6 inches) vireo, the Red-eyed Vireo is most easily identified by its olive-green back and tail, pale breast, plain wings, and deep red eyes with white eye-stripes. This species may be separated from the Philadelphia Vireo (Vireo philadelphicus), which also has a pale breast and plain back, by that species’ smaller size and yellower breast. Male and female Red-eyed Vireos are similar to one another in all seasons. The Red-eyed Vireo breeds across the eastern United States and southern Canada. This species also occurs in western Canada and parts of the Pacific Northwest, although it is less widespread in those portions of its range. This species is a long-distance migrant, spending the winter in northern and central South America. Red-eyed Vireos breed in a number of woodland habitats with dense undergrowth. During the winter, this species may be found in similarly-structured habitats in and around humid tropical forests. Red-eyed Vireos primarily eat small insects during the summer, but mostly switches to fruits and berries during the winter. In appropriate habitat, Red-eyed Vireos may be seen foraging for food on leaves and branches in the tree canopy as well as in the undergrowth. Birdwatchers may also listen for this species’ song, a series of fluty notes vaguely recalling portions of American Robin songs. Supplier: DC Birds.