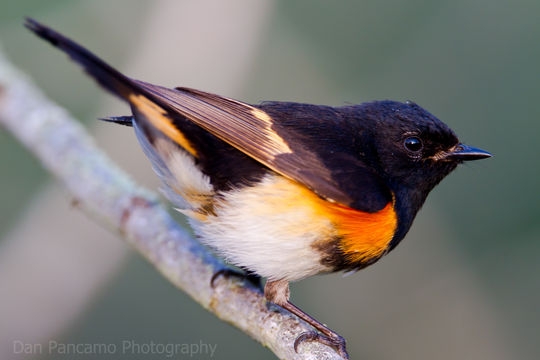 A medium-sized (5 inches) wood warbler, the male American Redstart is most easily identified by its black body, white belly, and conspicuous orange patches on the wings, flanks, and tail. Female American Redstarts are olive-green above and pale below with yellow on the wings, flanks, and tail. In particular, this species’ tail sets it apart from all other North American wood warblers as no other species has such large, brightly-colored tail patches. American Redstarts primarily eat small invertebrates, including insects and spiders. In appropriate habitat, American Redstarts may be observed foraging for food in the forest canopy, where their habit of frequently flashing their bright tails makes them more conspicuous than they might otherwise be. Birdwatchers may also listen for this species’ song, a high “tsee” repeated three or four times in quick succession. American Redstarts are primarily active during the day, but, like many migratory songbirds, this species migrates at night. Supplier: DC Birds.