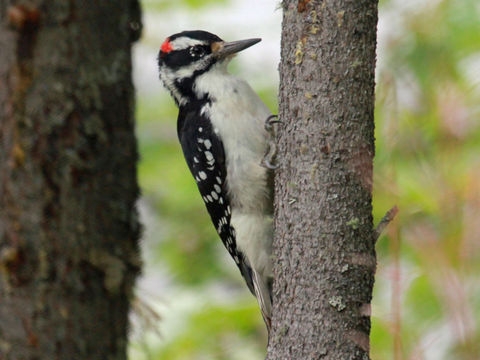 Hairy Woodpeckers occur from Alaska and most of Canada south to the Gulf Coast. In the southwestern United States and from Mexico to Panama they are found in mountain forests (mainly pines, but also in cloud forest in Middle America). They are found in a range of habitats that include large trees, including both open and dense forests. In its range, the Hairy Woodpecker closely resembles the Downy Woodpecker (Picoides pubescens), but the Downy is much smaller, with a bill that is noticeably proportionately smaller relative to the head (i.e., the bill has a more "stubby" appearance), and the outer tail feathers have black barring that is lacking on the Hairy's tail (these outer feathers instead being entirely white on the Hairy Woodpecker). In both species, the male has a red hindcrown spot that is not present in the female. Hairy and Downy Woodpeckers are often found together, but the Hairy requires larger trees and is usually less common, especially in the eastern portion of its range, and less frequent in suburban settings and parks. (Kaufman 1996; AOU 1998; Dunn and Alderfer 2011.) © Leo Shapiro. Supplier: Leo Shapiro.