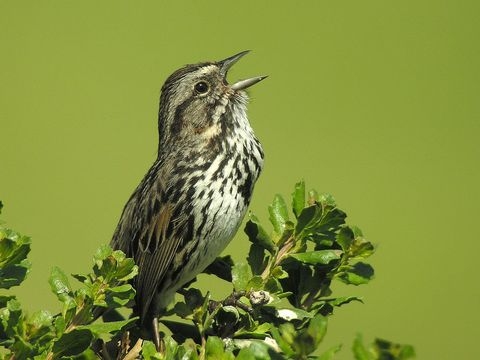 The Song Sparrow (Melospiza melodia) has a very broad geographic distribution that encompasses most of Canada and the United States south to (locally in the highlands) southern Mexico during either the breeding season or winter. This is among the most familiar birds in the northeastern and midwestern United States, where it is often seen singing heartily from a conspicuous perch or flying from bush to bush with a characteristic pumping tail motion. Numerous geographic subspecies have been described that vary substantially in size, bill shape, overall coloration and streaking (ranging from larger, darker birds in the Aleutians to smaller, paler ones in the deserts of the southwest). Song sparrows are found in thickets, in brush, around marshes, along roadsides, and in gardens. (Kaufman 1996; AOU 1998; Dunn and Alderfer 2011.) Supplier: Leo Shapiro.