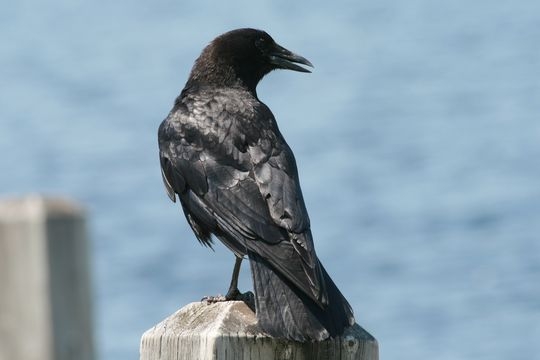 Only slightly larger (17-21 inches) than the similar-looking Fish Crow (Corvus ossifragus), the American Crow is most easily separated from its relative by its call, which is deeper and less nasal than that of the Fish Crow. Other field marks include a glossy purple-black body, thick bill, and slightly rounded tail. The American Crow occurs widely across the United States and southern Canada, absent only from the desert southwest, south Texas and northwestern Washington (where it is replaced by the Northwestern Crow, Corvus caurinus). Many American Crows breeding in Canada move south into the U. S. during the winter. However, more southerly populations are mostly non-migratory. American Crows tend to avoid wide expanses of open country such as desert, grassland, and tundra. Otherwise, American Crows are extremely adaptable birds, and are found in many habitats across North America, including forest, orchards, fields, suburbs, and even inner cities. Likewise, this species eats a variety of plant and animal foods, including fruits, seeds, small mammals, carrion, and garbage. Like most members of the crow family, the American Crow is extremely sociable. American Crows gather together in family groups to feed, roost, and defend territory. They will even mob larger predatory birds intruding on their territory, swooping down and calling loudly until the predator leaves the area. © Leo Shapiro. Supplier: DC Birds.