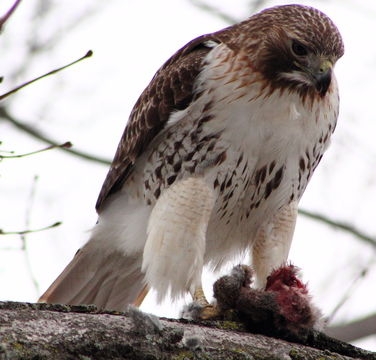 « Back to galleryItem 1 of 24Next »
Description:

A large (19-25 inches) hawk, the Red-tailed Hawk is most easily identified by its dark brown back, pale underparts, and rusty-red tail visible from above or below. In some parts of this species’ range, exceptionally light or dark subspecies occur, having more or less pigment in the back, breast, and tail than the nominative subspecies. Male and female Red-tailed Hawks are similarly-plumaged in all seasons; however, like most species of raptors, females are larger than males. The Red-tailed Hawk breeds from Alaska and northern Canada south through the United States, the West Indies, Mexico, and parts of Central America. In winter, northerly-breeding populations migrate south to the southern half of the U. S. Southerly-breeding populations migrate short distances, if at all. Red-tailed Hawks are birds of semi-open country. This species inhabits open woodland, shrubby fields, and even urban areas where food is plentiful. Red-tailed Hawks primarily eat small mammals, including lemmings, mice, and voles, but may eat small birds and reptiles when the opportunity presents itself. Supplier: DC Birds.