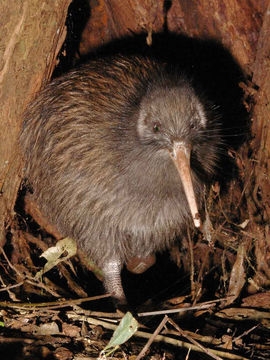 Having evolved in an environment without any mammalian predators, kiwis have some distinctly mammal-like traits. For example, body temperature is 38 degrees Celsius, about 2 degrees Celsius lower than most birds (4), but within the normal range for many mammals (5). Kiwis also have an excellent sense of smell, one of the most developed among birds, aided by the unique placement of the nostrils at the end of the bill (5). Kiwis feed by jabbing the bill into the soil to search for insects and worms, this causes the nostrils to become clogged, and requires vigorous blowing and sneezing to clear them again (4). The tokoeka is highly territorial and has been known to attack humans when defending its territory (3). Unlike most other kiwis, which tend be more solitary, the tokoeka lives in family groups occupying a shared territory, the size of which depends on food abundance (4). © Wildscreen. Source: ARKive.